Add another float shader property to control Z writing, which is on by default. We could again use a toggle, but that will always produce a keyword, which we don't need in this case. Add a ZWrite control to the lit pass only, as once again this doesn't concern shadows. Now both quads get fully rendered, even when their draw order is incorrect. However, the bottom quad still gets drawn after the top quad, so it's still not correct.

This is exacerbated by the solid shadows of the quads. It is also very obvious when the draw order flips. This is a limitation of transparent rendering that you have to keep in mind when designing a scene. With Z writing disabled, the insides of objects always get rendered when culling is off. However, the draw order is still determined by the triangle order of the mesh. This is guaranteed to produce incorrect results when using the default sphere and cube. With an arbitrary mesh the only way to ensure that the back faces are drawn first is to duplicate the object and use two materials, one that culls front an another that culls back.

Then adjust the render queues so that the inside is drawn first. That works for an individual object, but not when multiple such objects are visually overlapping. In that case all outsides gets drawn on top of all insides. The best way to render double-sided semi-transparent surfaces is to use a mesh specifically created for this purpose. The mesh must contain separate triangles for its inside and outside, ordered so that the inside is drawn first. Even then, this only reliably works for concave objects that never visually overlap themselves.

You can create a double-sided mesh with a separate 3D modeler, but we can also make a simple tool in Unity to quickly generate a double-sided variant of any source mesh. That's done by adding the MenuItem attribute to a static method, with the desired item path as an argument. The idea is that the user first selects a mesh and then activates the menu item, then we'll create its double-sided equivalent. So the first step is to get a reference to the selected mesh, which is done via Selection.

If there isn't a selected mesh, instruct the user to select one and abort. We begin by creating the inside portion of the mesh.

Clone the source mesh by instantiating it, retrieve its triangles, reverse their order via System. Reverse , and assign the result back to it. That flips the facing of all triangles. Then create a new mesh and invoke CombineMeshes on it. Its first argument is an array of CombineInstance structs, which just need a reference to relevant mesh.

First comes the inside mesh, then the source mesh. That guarantees that the inside triangles get drawn first. After that come three boolean arguments. 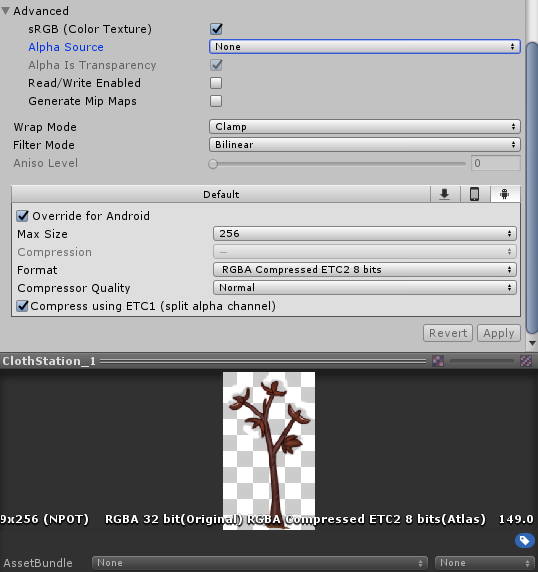 The first needs to be true , indicating that the meshes must be merged into a single mesh, instead of defining multiple sub-meshes. The other two refer to matrices and lightmap data, which we don't need. Finally, create a mesh asset by invoking AssetDatabase.

Its first argument is the combined mesh and the second its asset path. We'll simply put it in the asset root folder and give it the same name as the source mesh with Double-Sided appended to it.

The path and file name can be combined via the System. Combine method, so it works no matter which path separator your operating system uses.


And we have to use asset as the file extension. Now we can select any mesh and create a double-sided variant of it. You can select the default sphere or cube by selecting a game object that uses that mesh and double-clicking on its reference in the mesh renderer component. The resulting assets don't look like imported meshes because they're custom assets, but they work fine. So we can use those meshes for transparent objects and switch our fade materials to back-face culling. Up to this point we have ignored shadows, so our semi-transparent objects still cast shadows are if they were opaque.

They also receive shadows, but that's fine. Shadow maps cannot represent partial shadows. The best that we can do is use alpha-clipped shadows. Currently, alpha clipping can be enabled for a transparent material, but that also affects the surface itself. It is possible to only perform alpha clipping for shadows. We can support that by replacing the clipping toggle with three options: off, on, and shadows.

Then replace the toggle with a KeywordEnum with the three options as arguments. Now you can turn clipping back on. We did that because KeywordEnum uses different keywords. The keywords that we now use are formed by taking the shader property name followed by an underscore and then each option separately, all uppercase. The ShadowCaster pass must now use clipping when it's either on or set to shadows.

In other words, it shouldn't clip when it's off. This makes it possible for transparent materials to cast alpha-clipped shadows. It's not a perfect match, but it was easy to support and might be good enough in some cases. You can turn off shadow casting per object if you don't want them.

We'll also make that possible per material later. Transparent surfaces receive shadows just fine, but that might not be desirable. All shadows will disappear after making these changes, even though the materials all have shadows enabled. That happens because adding a new property to the shader doesn't automatically enable the relevant keyword. Selecting all materials and toggling the option will synchronize the property and its keyword. In contrast, when a new material is created all its keywords linked to attributes will immediately be set correctly.

While it's now possible to create both opaque and transparent materials with our shader, we have to manually select the correct blend modes and so on. Unity's shader inspectors hide these details and instead show a dropdown menu for the supported surface types.

We can do something similar, by creating a custom shader GUI for our material. We need to use the UnityEditor namespace for that, and also the UnityEngine. Rendering namespace to use the BlendMode and CullMode enum types later. 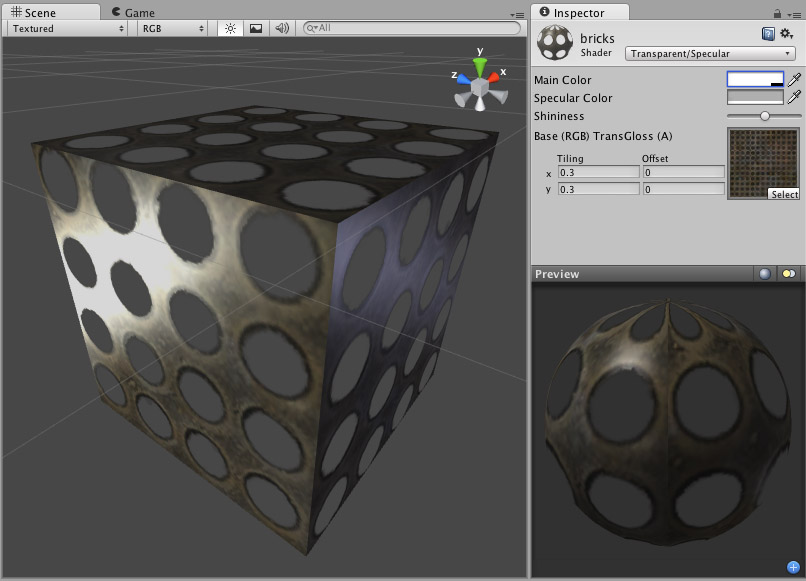 It has a MaterialEditor parameter, which is the underlying object that tracks the materials that are being edited. It also has a MaterialProperty array parameter that contains references to all the shader properties of the selected materials. To use our custom GUI we have to add a CustomEditor statement to our Lit shader, followed by a string containing the name of our class.

To do our custom work we'll need to use the editor, properties, and selected materials, so let's keep track of those with fields.